“I’m getting on the jumbotron tonight.”

It’s good to have a goal, and this was mine on June 11, 1998. I was a broke college intern who scored Stanley Cup tickets when a customer backed out at the last minute. My beloved Detroit Red Wings were hosting the Washington Capitals at Joe Louis Arena.

Mom said she would look for me on TV, which is what every mom says when their kids go to a sporting event. Sure mom, I’m sure you’ll pick me out of the 40,000 screaming fans. Look for me in the red jersey.

On the way to the game, I couldn’t stop thinking about mom’s comment. I talked about it with my friend who I brought to the game.

Sticking out a hockey game is difficult. Add the energy of a Stanley Cup Final, and distinguishing yourself is nearly impossible. We arrived early enough to fuel up with Bud Light. This led to more talk about the Jumbotron. I was not going to be denied. 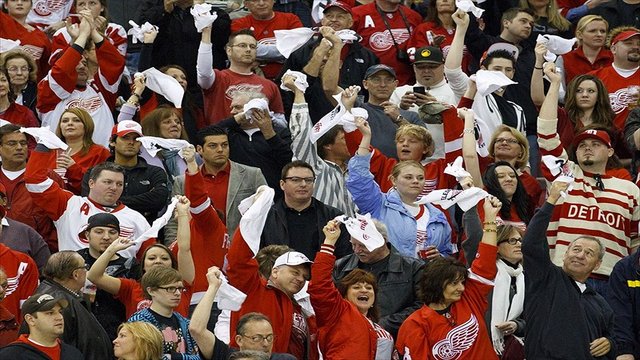 "Look for me in the red jersey, mom."

From the opening face-off, I let it rip. During every stoppage, I was dancing in the aisle. It didn't matter what song they played.

I was on fire, stopping only to wipe sweat from my face and flag down the beer vendor from time to time. For two and a half periods, I failed. I developed a small group of fans seated near us but was unable to get the camera's attention.

Then my big break arrived. During a TV timeout, House of Pain brought me out of my seat, "Pack it up, pack it in, let me begin, I came to win, battle me that's a sin."

The camera found me jumping around in the aisle, and I finally got lucky. I pointed at the screen like every idiot does, then hugged my friend.

There Are No One-Hit Wonders

The first sales call I made was a disaster.

I spent days preparing for that call. It was a weak lead offered to me by one of the veterans. I researched the customer incessantly and wrote out a call script two pages long. I never got to the first question.

This customer had bad blood with my company and spent two minutes chewing me out after I introduced myself. Before I could ask a follow-up question, he hung up.

After one sales call, my career was over.

I was confident that this career track was not for me. Why shouldn't I feel this way? After all, I now had zero wins and one loss as a cold-caller.

When you don't have any success, all you can see are the victories of others. They have what you want. You can't see all of the losses they took to get there. Whenever a salesperson in the office closed a big deal, it reminded me that I wasn't cut out for sales.

I didn't see the 100 prospects who turned them down that month. I didn't see their failures, only mine. Hundreds of customers hung up on me. I wish I had recordings of how bad my delivery was on cold calls in the first three months.

I was a nervous joke.

It wasn't just that I didn't know how to ask questions, connect or make a compelling case for someone to stay on the phone. I was terrible at all of that.

I had no idea. But, I had a budget to sell $4 Million worth of that stuff. I needed to figure it out or GE would find someone who could.

I had no problem working 16-hour days. But I didn't know where to start.

It turns out the answer was yes to all of those questions. The road was going to be longer than I originally planned.

By the time I closed my first deal, no less than 2,000 prospects had rejected me, most opting not to return one of my five carefully scripted voice messages. At least 1,500 of those prospects had no serious chance in the first place. A more experienced version of myself would not have bothered.

But the only way to become a more experienced version of myself was to learn that the hard way.

The first sale felt lucky. Someone knew someone who referred me to someone. Sales often happen this way, but at the time, I was so defeated that my first sale did little to pick up my confidence.

I couldn't reverse engineer that first sale because it felt like serendipity. I would learn that my first victory was anything but luck. The path to most sales is indirect.

An opportunity materializes, after bouncing from several seemingly random leads that started when you went to a networking event, wrote an article or made a cold call.

Success Is A Game Of Probability

The higher your aspirations, the lower your probability of success.

If you aspire to be an average manager at an average company, your chances of accomplishing this are greater than 50%. Show up with a great attitude, work hard and eventually, you'll be rewarded.

If your goal is to build a company that sells to millions of people, your percentage chance is closer to 100,00o to 1. Therefore, you need to solve a math problem.

There is an old joke about an angry man spurning God in church for not helping him win the lottery. Fed up, God booms back at him, "Hey genius, help yourself and buy a ticket first."

If you want to succeed at anything, show up more and your "luck" will change.