There are four types of managers. I never thought about leaders in these buckets until I met a CEO who fit perfectly into one of the categories.

I nearly accepted an executive role with a big company in Chicago several years ago. The first round of interviews was great and I enjoyed the time I spent with everyone, including the President, who would be my direct manager.  This opportunity was exciting for many reasons.

I would be paid well, and moving back to Chicago to be near family was compelling.  The company was expanding and taking market share.

I was asked to return to meet with the CEO. He was direct and to the point, wasting no time with pleasantries. This boss was a driver in every sense of the term, asking challenging questions quickly.

Every question felt like a right hook, with my responses acting as counter punches to get off the ropes.  It was exhilarating and made me want the role even more.  I might be running a large business for this company, and he was putting me through proper paces.

After 45 minutes of avoiding his knockout punch, he seemed satisfied and even laughed at one of my lame jokes.  He handed over the interview and asked what questions I had for him. This was when my perception changed.

I asked him about the sales force, and he immediately rolled his eyes, “What can I say?  They are a typical sales team.  Filled with excuses and can’t close deals without price concessions.”

I asked him how the organization used feedback from customers in product design, “Customers are the worst place to get feedback. They don’t know what they want, especially our customers. Half of them are on the verge of bankruptcy, so their feedback isn’t exactly helpful.”

I asked him about priorities, and he quickly wrote down some words on paper.  The CEO handed me the paper and asked me to rank the words.  He told me this was an intelligence test that most people fail. I did this strange exercise, and he seemed pleased, “You did better than most.”

Huh?  He did not explain why he had me do this exercise, why most people fail, or why my answer was correct.  It felt like an attempt to intimidate but came across as clumsy and awkward.

I asked a follow-up question on a topic I discussed with one of his executives in a previous interview, and he rolled his eyes with disdain, “Tom said that?  That’s not surprising.”

He didn’t answer the question but launched into a rant about his executive team.  It was clear this individual didn’t care much for his direct reports and felt the company’s success was due only to his brilliance.  I am still not sure why he chose to share this with me in an interview.

Surprisingly, the interview ended with him telling me that his company needed more people like me.  He switched from tough guy to salesman, highlighting the substantial upside I might enjoy if I joined the company.  I listened politely but couldn’t wait to get out of his office.

I called my wife from the airport before my flight back home to D.C., and she asked how it went.

“That CEO is an incredible asshole.”

Shortly after talking with my wife, I received a call from the executive who would be my direct manager.  He told me that I did well and made me an offer.  The pay was even better than I expected, but the decision was still straightforward.

Confused, he asked me if I was expecting more money, “It’s not the money.  I think this isn’t a great fit.”

“Why did you come out to Chicago to interview with our CEO if that is how you feel?”

“I felt differently before the visit.”

An awkward pause followed as my words sank in.  I was telling him that my impression of that interview was radically different than his CEO’s take.

“Are you sure you don’t want to take the weekend to think about this?  It is an incredible opportunity for you.”

“I appreciate that, but no.  The longer I wait, the more I give the impression that I am negotiating.  I am certain about this decision.”

I got off the phone and thought about how easily I came to that decision.  After a month-long courtship, I didn’t even need to sleep on the decision.

I found it odd that the executive who recruited me didn’t attempt to stick up for the CEO or change my mind about him.  He avoided the subject and tried to sell other aspects of the company.

Six months later, I had an answer to that riddle.  That executive I turned down left the company. Free from the burden of covering up, he confessed to me that my gut feeling was accurate.

“That guy was the worst. We were miserable.”

I have worked for many managers over the past 20 years and I adjust my approach, focus, and communication style to match what they are looking for with each new boss.  I find ways to work with every manager.

But, I have only had a few genuinely great bosses.

I believe a great manager is likable and demanding. You can trust and respect them. They are fun to work with while also being someone who brings out the best in you. They care about you, but good managers are not afraid to piss you off, as I’ve written about.

You can see what kind of manager someone is just by paying attention during the interview. Too often, managers approach interviews with a one-sided mindset.  How can this candidate impress me enough to receive an offer?  They assume that any candidate willing to put on a suit and tie will accept an offer.

Talented candidates have choices.  If you leave a candidate with an impression that you are not likable or competent as a manager, why would they join your company?

There are four types of managers, and their interview style often matches their management style. 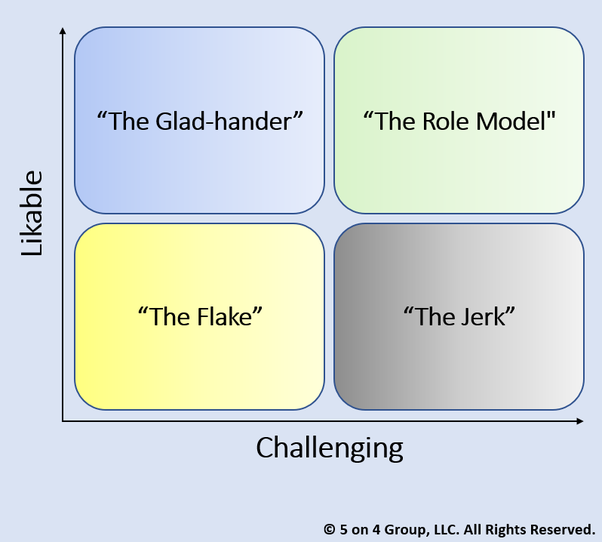 Accepting a job with The Flake means entering a world of chaos, void of any organization. You’ll need to be a self-starter as they will not challenge you. They can barely keep up with their tasks. You will want to make sure you have the autonomy, as responsiveness will be an issue if you can’t make your own decisions.

Working for the Glad-Hander can be fun as they have an outgoing personality and love to interact with their team. If you are a high achiever, you should be aware that you might not be challenged and will most likely work with others in the same boat. Your manager values relationships over performance, leading to a team filled with people who measure their worth by how much the boss likes them. This can frustrate a high achiever as pay might not fluctuate based on performance.

You should not expect encouragement from this manager but ample criticism. Your conversations will always be about business, and your peers will feel the same. If your interview was socially awkward, expect the office climate to be the same.  Even pleasantries feel forced with this type of manager, like going through a checklist and “Make small talk” is on the list.

This interviewer is just as fun to work with as they were in the interview. Your peers will like this manager personally and work hard to deliver. The Role Model will push you but offer all the support you need to win.  This is the type of leader we aspire to emulate, and when you find a Role Model, hold on for dear life.  They offer the rare opportunity to have fun at work while growing personally and professionally.

The next time you get out of an interview, pull up the graphic of the four types of managers, and ask yourself two questions:

Answer yes to both or no to both, and you have an easy decision. If your answers are somewhere in between, weigh out the pros and cons.

If you are a manager conducting the interview, ask yourself these questions:

Just as an interviewer can get a great sense of what type of employee a candidate will be, that candidate is getting a good read on which of the four types of managers they are signing up for.  We are rarely different as leaders from the image we portray as the interviewer.

The impression you leave as an interviewer should be deliberate.  Display the type of leader you are in the office.

There is no definition for a “bad manager,” but just like pornography, people know it when they see it.

Come along and ride on a fantastic voyage with Ian. Slide, slide, slippity-slide your email in the box below.